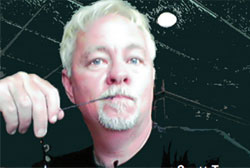 Scott Terry, President
Scott Terry’s answer to Big Data terminology is, “Contrary to the hype, Big Data isn’t anything new. Twenty years ago it was terabytes, today it’s petabytes. While limits have been following Moore’s law, Big Data isn’t measured in total bytes, it’s measured in value. If you don’t know how to make it produce value, the ‘Big’ in your ‘Data’ has no meaning – it is worthless.”

Our Data Scientists have developed a ground-breaking prospect marketing solution that is truly better, faster and cheaper

If anybody would know, it’s Scott Terry. Prior to launching Rapid Progress Marketing and Modeling, LLC in 2008, Terry’s background included a successful career in the Quantitative Arts and as an Executive for several well-known corporations. He’s worked on both on the client and services side of Data Science, Data Mining and Predictive Analytics. “We’ve walked in our client’s shoes. Instead of being seduced by the hype, our focus is on the application of strategy, algorithms and technologies for client success. That’s a critical difference,” says Terry, who is both the company’s Founder and President.

With its proven, experience-based approach, Terry stresses that RPM2 practices what it preaches. “We look at the implications and how it will impact our clients first, as if it’s our own business. Because of this, there have been a few times when we’ve turned away business because it became clear that the client wanted to spend money on ‘Big Resources’ that would not help their bottom lines. That’s unfortunate but it is true.”
According to Terry, developing a Predictive Model isn’t the end, it’s a beginning. With the first success, the focus continues to be centered on prioritizing even more predictive opportunities. So RPM2’s Data Mining and Predictive Analytics services are purposely flexible and customizable. To illustrate, Terry discussed the three pillars of RPM2’s success: It 1) Provides Predictive Analytics and Data Science services, 2) It helps businesses develop their own practices, and 3) It provides practical, real-world Data Mining and Predictive Analytics training to the core assets of every organization … its people.

There are numerous instances where RPM2’s expertise has helped clients across retail, financial services, technology, gaming, entertainment, hospitality, and cataloguing, each with achievable, measurable ROI’s. In one case, it was able to identify a leading tech company’s online and offline customers through a novel marriage of Consumer Research and Predictive Analytics. This intelligence was used to identify and prequalify a million more high-propensity, offline prospects by name. In yet another instance, Terry’s innovative solutions leveraged multiple marketing channels and target marketing to help a company generate $90 million in only nine months.

More recently RPM2 has introduced a ground-breaking prospect marketing solution called Rapid Progress Prospectorsm that promises to shake up the marketplace. “Leveraging our Targeting Marketing expertise with state-of-the-art techniques, our Data Scientists have developed a ground-breaking prospect marketing solution that truly is better, faster, and cheaper.

The model is one-third the price of traditional models, it utilizes data from the leading compilers, and we deliver a fully-implementable model in one third the usual time … exactly what our clients want. But it’s important to know that RP2 is not an ‘automated solution’. Algorithms are unintelligent tools that must be used by skilled professionals. Every model we develop is custom-built by experienced, Senior Data Scientists. We’ve upped the quality, lowered costs, and decreased delivery time. And we do it without cutting corners,” says Terry.